Ascribed to Guru Nanak Sahib by the tradition, Japu Sahib is one of the longer Banis comprising of thirty-eight pauris (lit. rung; poetry in verse) and two saloks (lit. praise, a poetic form), uttered in no particular rag. The Bani is important in the Sikh tradition from many aspects. It is central to a Sikh’s daily recital and reflection, besides being a part of the ceremony of khande-ki-pahul (Khalsa initiation ceremony). It also finds mention in every major rahitnama (documents recording Sikh code of conduct) that prescribes daily Sikh routine.

The Sikh tradition believes Japu Sahib to be a glimpse into the Guru Granth Sahib and its worldview. It stands as a firsthand witness account of Guru experiencing ‘Truth’, the eternal Divine reality. Japu Sahib is considered to be deep, that continually speaks to the metaphysical, even as it communicates at a physical plane. Its apparently multi-layered message traverses between the human intellect and consciousness, and at time seems to go even beyond into a world not possibly experienced by human faculties.

Over the past centuries, many have tried to unravel Japu Sahib for the commoners. Over seventy commentaries of Japu Sahib can be traced today, many possibly still unknown, highlighting the significance of the Bani.

Japu Sahib course is another humble attempt at revisiting the Guru’s message. 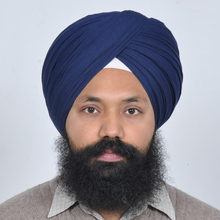 Surender Pal Singh is a researcher in Sikh studies. He works at the Sikh Research Institute (SikhRI), where he develops curriculum, presentations, and research papers on Sikh history and culture. He is the lead instructor of Gurbani 101 track at Sidak, an annual leadership program by SikhRI. He is the co-author of Gurbani linguistics book Guru Granth Sahib – Its Language and Grammar and Workbook Gurbani Language and Grammar. He has over ten years of experience in teaching Gurbani linguistics and twenty years of experience in teaching Sikh theology and culture. He received Master of Arts in English and Religious Studies. He lives in Panjab.

Tweet
We suggest moving this party over to a full size window.
You'll enjoy it way more.
Close
Go Fullscreen